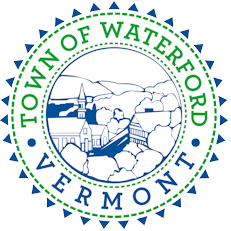 Dr. Harris's history of Waterford uses a Burlington Free Press article from 1937 to explain the history of Lower Waterford's "White Village." At that time -- shortly after the Great Depression, and only a few years before the Second World War -- the town's focus was almost entirely on farming and the trades that go with it, and Upper Waterford still stood up the river from Lower Waterford. Owners of property in the upper village knew that the second major dam on the Connecticut River would flood out their homes and farms, and they were gradually selling land to the New England Power Company in preparation.

The Free Press article described the lower village at that time as almost entirely a summer place "of the better kind where the summer people stay all season and contribute largely to the life of the community." Sometime after 1919, Mr. John W. Davies, a St. Johnsbury creamery owner and originally from Reading, Mass., purchased almost "the entire village" and established its color theme, the one it's still known for: white-painted structures with green shutters. The attractive appearance quickly became a tourist draw.

When Mr. Davies died, many of his buildings were sold, and his wife continued to reside in what's now the famous Rabbit Hill Inn -- but from 1912 to 1957 was a residence. (There's a detailed history of the inn at

http://www.rabbithillinn.com/about/inn-history.) The Rabbit Hill Inn grew from a 1957 purchase that turned the structure first into a "motel," then in 1980, with fresh owners, into a gracious country inn that continued to rise in esteem and elegance as owners built on its possibilities.

On the same side of the road as the inn are a former village store that in the mid-1900s housed the library, and also one of the town's early schoolhouses, the Lower Waterford School, now a private home. Across from the inn stands the Congregational Church, as well as the current library -- named for Mr. and Mrs. Davies (the Davies Memorial Library). Around the corner, using a separate entrance to the lower floor of the library building, is the town office and a limited-hours post office that still serves the village.

The color scheme that Mr. Davies initiated remains in place: The White Village is one of the most photographed locations along the Vermont side of the Connecticut River, and is worth visiting in all seasons, to savor both its changes and its enduring gracious character.

A little extra information on Mr. Davies: He was born John Wesley Davies in Union, Maine, on July 10, 1866; he married Marion Florence Lombard in Massachusetts on December 26, 1887. They had three children. Mr. Davies died in 1937 in Lower Waterford, where his wife continued to reside until her own death in 1949. In 1930 Mr. Davies was president of the Manton-Gaulin Mfg Co., in St. Johnsbury, a company with considerable expertise and patents in homogenizing milk and making ice cream; Dr. Harris's book suggests that Mr. Davies owned at least two creameries himself, one in St. Johnsbury, VT, and the other in Littleton, NH. -- BK

www.BethKanell.com
the research and writing life:

Waterford: A History of Settlers

Waterford, Vermont, is a “young” town – it wasn’t settled until after the American Revolution. Exact dates are scarce, but it’s clear that James and Submit Adams arrived by 1783, in the part of town that bordered St. Johnsbury. Soon a few dozen others began to settle, in clusters that became the town’s villages: Upper Waterford and Lower Waterford, West Waterford, and districts like “Copenhagen.” Each one focused on industry: grain mills, lumber mills, tanneries. The town’s rivers and fierce springtime streams provided power for these. Farms spread out around the villages. And churches and schools, the mainstays of educated people and community life, were established all over the town.

Waterford contributed more than her share of Civil War soldiers, with some returning, some memorialized instead. (The town has a dozen cemeteries; at least three are still active. Visit them to find the settlers, the patriots, the schoolteachers, the families.) More patriotic men and women would volunteer in the wars of the 20th century, too. In between, families moved west for land, for gold, for adventure. And many returned.

In the 21st century, Waterford’s students learn advanced technology just as those in urban locations do; roads, river, and solar power are all part of local discussions. Service industries and telecommuters add to the mix. Broadband coverage is generous and essential. Community events multiply, and the library is the heart of Lower Waterford, today’s main village. Most of all, the sense of being “many villages” linked in one sturdy and prosperous town unites Waterford’s citizens in shaping current history, in one of the loveliest locations in northern Vermont.

http://waterford-vt-history.blogspot.com. Some day, you, too, may take part in the town’s stories of the past, present, and future.